Episode 905, series 74 – The Return of The Sit Stand Dispute

Monday 1st June marked the release of the latest editorial from ‘Public Health England’ surrounding sitting/standing in the workplace.

Before we proceed to discuss the study and its key points, I want you to know that this isn’t a poor attempt by myself to gain sales on height adjustable desks by frightening you into a purchase (we have an extensive range available by the way – from entry level to the markets leading sellers – Of course I am joking) I merely wish to analyse the results with like-minded people who are in a similar position as myself (on a chair for multiple hours a day).

It’s always been claimed that sitting at work for prolonged amounts of time can have negative effects on your health and impact your lifestyle in the coming years. However, this was more of idle talk than the stone cold facts that have now come to light. Some of these facts that the authors at ‘Public Health England’ have published may shock you a little. I must say they have me (I already want a sit stand desk) but it’s always best to take in this sort of information with that much used term ‘ a pinch of salt’. One week red wine is good for you, the next shows salad is bad for you. It’s one of those. But please read on and let me know your thoughts. 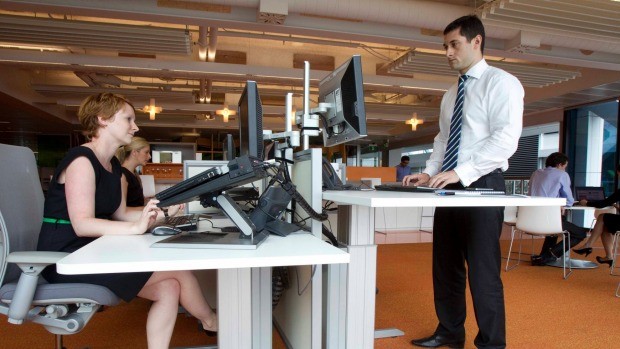 Reviewing existing scientific evidence, which dictated the boundaries they set, the authors found that compared with those who sit the least, to those who sit the most are more than twice as likely to develop type 2 diabetes and cardiovascular disease. Additionally, a 13% and 17% increased risk of cancer occurrence and mortality respectively.

Public Health England have said “office workers should spend at least a minimum of two hours on their feet at work – overtime building up to 4 hours”. Making this change to your daily office routine is said to help avoid ill effects of sedentary lifestyle.

On average, we Brits spend 8.9 hours each day sitting down. One study suggested that for those sitting for more than 7 hours a day, there is a 5% increased risk of premature death with each additional hour OFF their feet.

Professor Maureen Baker, chair of the Royal College of GPs, representing members of a profession who were urged to stand up during consultations in an article in the BMJ last year, said GPs tended to move about anyway but that the study “provides food for thought”.

She added: “In many cases – particularly for smaller organisations – the adjustments necessary to allow employees to stand for a significant proportion of the day might be unrealistic. It is, however, important that any employer recognises the responsibility they have to maintain their employees’ good health.”

Apologies for bombarding you with figures, it’s now time for a long walk. But as a parting gift from me to you, I’ve got my hands on a small quote which contradicts the benefit of standing at work (WE WILL NEVER WIN).

The study stresses that standing still for prolonged periods of time also carries health risks and warns that people who start standing more “could expect musculoskeletal sensations and some fatigue as part of the positive adaptive process”.

Dr Ann Hoskins, of Public Health England, welcomed the study but said “more research needs to be carried out before daily targets for work place activity are recommended”.